Emeralds were discovered in Russia in 1830 near the city of Ekaterinburg in the Ural Mountains region. Some of the finest world-class emeralds and alexandrites were mined at the Mariinskaya mine, which was named in honor of Grand Duchess Maria, daughter of Tsar Nicholas I, between 1833 and 1914. Today, Russian gem-quality emeralds are rare. Moreover, antique jewelry with Russian emeralds is very rare.

The ring is accompanied by an AGL prestige gemstone report for the emerald. The report states that the emerald is of the Russian Ural Mountains origin and has some minor traditional enhancement what is rare. 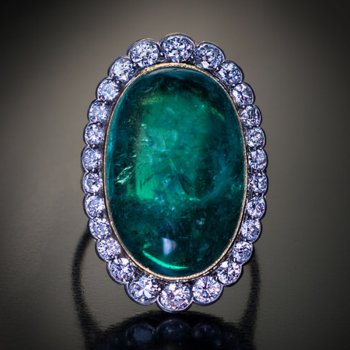 Despite the current conditions caused by COVID-19, we ship orders via FedEx priority overnight within 1-2 business days. Stay safe!
+